“I’ve been getting it done for the Marine Corps for 30 years; I can get it done for you.”

Mark Doehrmann ended his interview with this promise, landing him his dream job at CarMax in 2017.

A year after securing his position at CarMax as a Line Production Manager, his story came full circle when he returned to Hiring Our Heroes’ Camp Pendleton Transition Summit in August — the very event that introduced him to CarMax — eager to help others discover a successful career.

Transition Summits provide workshops, networking, and hiring fairs to service members approaching the end of their duty. These events encourage a smooth, successful transition into the civilian workforce.

Lieutenant Colonel Doehrmann served in the Marines Corps for 30 years before retiring as a Senior Strategic Mobility Officer. He knew he had valuable skills to offer, but recognized his military career was not a perfect translation into the civilian corporate sector.

As part of the Marine Corps Transition Readiness Program, Doehrmann started attending Transition Resource Seminars (TRS) nine months before he retired. The program encouraged participants to attend job fairs to build a network, and research companies to determine a good fit. Doehrmann took the advice and got right to work.

“Mark was very focused on doing the right thing – attending the training, listening to what they had to say, and putting it into action. Mark dove in,” said Jack McCarthy, senior recruiter for the Military Program at CarMax.

Doehrmann began using the skills he learned in the Hiring Our Heroes’ Career Connections Workshop by updating his LinkedIn summary and thoroughly researching companies. He revised his resume down to just two pages, and tailored it specifically for the jobs he was interested in.

“I really tried to take it in steps by going to all of those organizations, attending Transition Resource Seminars, the VERCTAP workshop, Operation Connect workshop, and talking to Hiring Our Heroes. I did this early in the transition process to set myself up for success so that when I started going to those job fairs and having conversations, my resume was on track based on the companies that I was interested in,” said Doehrmann.

Throughout his job search, maintaining a work-life balance was important to him.

“I was at a point in my life where work-life balance was important to me, more so than a job title, travel, or hours worked,” said Doehrmann.

Whether it’s travel or job function, Doehrmann believes transitioning service members should prioritize what’s important to them as they look for a new career. He reminds them to balance their work and family life, and never settle for something that doesn’t make them happy.

When the time came, Doehrmann had a job waiting for him at CarMax.

“Although I was recruited by several companies, I kept coming back to CarMax,” stated Doehrmann.

He believed CarMax respected work-life balance, supported the military community, and believed in employee development. These values were a reflection of his military background.

Although transitioning out of the military can be intimidating, Doehrmann’s story of success can inspire other transitioning service members. He advises taking advantage of the resources available to them, and keeping an open mind to receiving resume and interview feedback.

“As a veteran, you have to figure out what it is that you want so that when you’re doing research and targeting companies that you want to work for, you’re going to get the results that you hope for — the dream job,” said Doehrmann.

Start the path to a new career by registering for a Transition Summit near you! 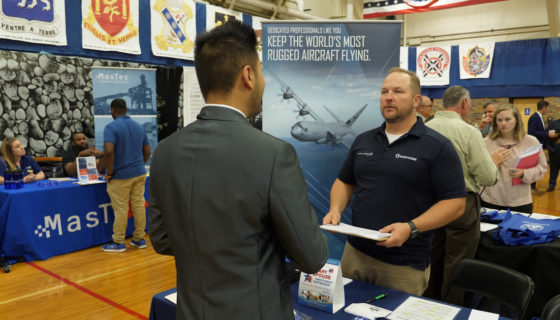 In a competitive search for qualified candidates, hundreds of companies have found a talent pool with leadership As a Navy spouse of seven years, Kathleen Kaminski has been willing to go wherever the military