WASHINGTON, DC – U.S. Army veteran Jimmy Reddell says criss-crossing the country behind the wheel of a Kenworth 18-wheeler is the best job of his life.

“I enjoy the freedom. I do not have a boss sitting right there by me. I like the challenge, and that you are always coming up with solutions to problems. I like constant change, and I really enjoy meeting people all over the country,” explains Reddell.

As of January 1, Reddell is riding in style. As the 2021 Transition Trucking: Driving for Excellence Award winner, he is now the proud owner of a Kenworth T680 truck donated by Kenworth.

A native of Little Rock, Arkansas, Reddell joined the trucking industry after spending 22 years in the Army. When he was only 17 years old, he enlisted in the U.S. Army Reserves and started as a truck driver. Eventually, he became a Patriot air defense fire control operator, an artillery cannon crewman, and a recruiter for the Army National Guard.

One of the most rewarding experiences in his military career was helping in the aftermath of Hurricane Katrina. After seeing the historical storm’s devastation, Reddell asked to be sent to help. He was tasked with distributing food, water and other essential goods to those who had lost everything. Reddell credits his career in the military as having prepared him for a successful career in trucking.

“I believe my precise attention to detail, punctuality, discipline, and keen sense of urgency has helped me to be successful in my civilian career. I learned these attributes as a way of life in the military and continue to draw upon them in my civilian life,” says Reddell.

As Reddell transitioned into civilian life, the COVID-19 pandemic hit. Upending his post-military plans of doing contract work overseas, he realized his dream of becoming a truck driver could become a reality.

“I found myself in a position to commit to my lifelong desire to be a professional driver. The idea of traveling or experiencing all 48 states, all the while making a living and serving my country through the delivery of necessary food and goods, was a dream come true,” said Reddell.

Deciding to take the leap, he used his GI Bill and attended a one-month driving academy. After completion, he signed on with Stevens Transport and as he says, “the rest is history.”

A Way to Accelerate Their Newfound Careers

The “Transition Trucking: Driving for Excellence” award campaign, launched in 2016, is part of an overall effort to inspire the hiring of more veterans into the trucking industry. The campaign also helps to address the emerging truck driver shortage. As the main part of the initiative, deserving veteran drivers who have made a successful transition from military service to the trucking industry are nominated by their carriers for the chance to win a fully loaded Kenworth T680 truck to accelerate their newfound careers.

A public vote and an independent selection committee narrowed the field down to Reddell and two other drivers, runners-up U.S. Marine Corps veteran and Prime Inc. driver James C. Rose, and U.S. Army veteran Christopher Slindee of Knight Transportation. Both men were presented with a $10,000 check.

“We are honored to recognize Jimmy Reddell, a 22-year Army veteran, for his service to the country and commitment to excellence in the transportation industry. Kenworth’s tremendous contribution of a T680 will ensure Jimmy’s continued success as an owner-operator,” said Eric Eversole, president of Hiring Our Heroes.

“Jimmy Reddell’s accomplished military career instilled attention to detail, punctuality, discipline and a keen sense of urgency that has helped him to be successful as a professional truck driver,” said Brad Bentley, FASTPORT president. “Jimmy has a great support network at Stevens Transport to begin his civilian career, and I know he will be a great ambassador for our industry moving forward.”

“Jimmy Reddell’s accomplished military career instilled attention to detail, punctuality, discipline and a keen sense of urgency that has helped him to be successful as a professional truck driver.”

Winning the truck brings Reddell one step closer to realizing his dream of one day owning several trucks to start a small fleet within Stevens Transport.

“I am very fortunate that I have an employer that supports my dreams and does everything in their power to help me achieve them,” said Reddell.

Get more information about the Transition Trucking Driving for Excellence award. 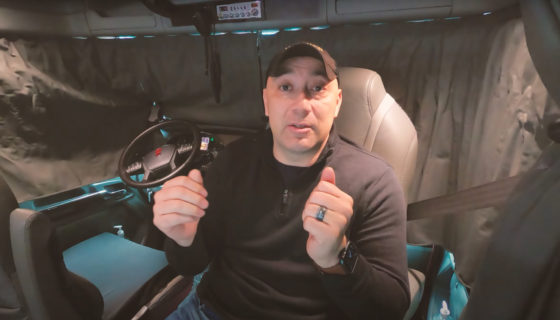