In mid-February, Hiring Our Heroes hosted a Career Summit aboard the USS Midway.

While there, we had the privilege to sit down with Scott McGaugh, Marketing Director at the USS Midway. McGaugh played an integral role in bringing the floating museum to the San Diego coast in 2004.

Listen in as this author, philanthropist, and USS Midway enthusiast describes the process of transitioning an aircraft carrier into the fifth most visited museum in the United States.

1. San Diego is the birthplace of naval aviation and home to the Pacific Fleet. Yet, America’s Finest City didn’t have a tourist attraction to showcase the Navy’s rich history before the USS Midway.

“We did not have any kind of tribute or memorial or tourist attraction, if you will,  to really reflect that unique heritage of San Diego. That was really what gave rise to the effort of community leaders, who had a lot of other things to do back in the 1990s, to stick it out for 12 years to bring Midway here because we truly believed it was kind of a hole in our community fabric. If we were really going to reflect all that San Diego is we needed something like this. This wasn’t a nice to have. This was a need to have.” – Scott McGaugh, Marketing Director at the USS Midway

2. In less than six months, the decrepit and rusty Midway transitioned into a museum complete with female restrooms, a restaurant and gift shop, aircraft exhibits, signage, and audio tour.

“All of that had to be accomplished in less than six months and we didn’t finish it, but we were able to get enough done that we could open in June of 2004. We haven’t looked back yet. We still have, 15 years later, a five- and seven-year build-out plan of more exhibits and more aircraft that we’ll be adding. As a museum, we’re only 15 years old. We’re a baby compared to other museums that have been around for 100 years.”– Scott McGaugh, Marketing Director at the USS Midway

3. USS Midway is in a constant state of transition.

“The museum we are today, the way the volunteers literally run the museum, the exhibits plan, the ability to support through our foundation, veterans, active duty family needs, and veterans and so on, none of that existed 10 years ago, five years ago. It really is a constant state of transition – of planning, reflecting, assessing, listening to a lot of our customers, our guests, our partners, such as Hiring Our Heroes – and making changes to the course of direction, as appropriate.” – Scott McGaugh, Marketing Director at the USS Midway

4. USS Midway is a museum by day, event venue by night. Each year, the former aircraft carrier hosts 275 events and 400 active-duty Navy ceremonies.

“It’s only been in the last four or five years this museum has gotten to a point where we can engage corporate partners around the community in different (and) meaningful ways. Certainly a job fair like this, for our veterans, is something that we’re so pleased that we are able to accommodate you and look forward to more opportunities in the future.” – Scott McGaugh, Marketing Director at the USS Midway In 2017, Hiring Our Heroes released a groundbreaking study, Military Spouses in the Workplace, based on a survey 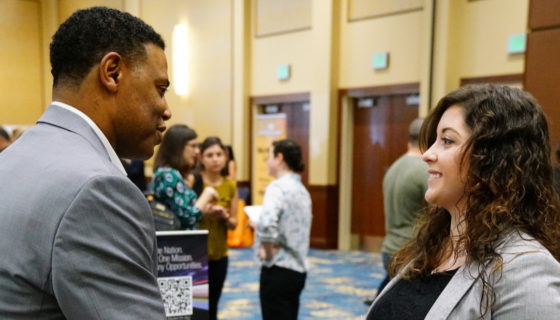 The MSPN gives military spouses access to local business leaders, peers, and mentors, and support in their career development. A former Air Force intelligence officer gives advice for veterans planning to be entrepreneurs after the military.