Military spouses – the Department of Labor wants to hire you.

O’Brien noted that this executive order was a win, not only for military spouses, but for the federal government.

“The federal government is facing a mission-critical challenge of attracting the top talent to civil service. Nearly a quarter of the federal workforce is older than 55. Only 17% of federal workers are younger than 35, compared to 40% in the private sector,” she said.

Since May 2018, the Office of Personnel Management (OPM) and the Department of Labor (DOL) have worked together to implement Trump’s executive order with hiring managers at all federal agencies.

This year, the Labor Department is recruiting and providing employment assistance at more than 25 military spouse hiring events through a partnership with Hiring Our Heroes.

“Our secretary wants to be out front on this, so he’s charging the department to clearly articulate when we advertise our jobs that these jobs are open to military spouses,” Green said. “Obviously, there are a lot more jobs based out of D.C. than any other location, but we have regional and state offices all across the country, so there are opportunities all over.”

Right now on USAJobs.gov, the Department of Labor is taking applications for an economic assistant in North Dakota, a workers’ compensation claims examiner in Philadelphia, and an OSHA director in Alabama, among others. All of these job postings and many more include the option to apply with the military spouse hiring authority.

Besides attending hiring fairs, DOL hiring authorities worked to streamline the application process for qualified candidates. They also lead informational sessions to encourage the use of the hiring authority to fill vacant positions at other federal agencies.

Now the challenge is having military spouses apply for these jobs, Green said.

“The last couple of jobs that I advertised I did not get any military spouse candidates apply for them,” he said.

Here are OPM’s tips for finding eligible jobs and applying as a military spouse:

This annual report will include recommendations, developed in consultation with the Secretary of Defense and the Secretary of Homeland Security, to improve license portability and remove barriers to military spouse employment.

“The federal government is facing critical shortages in the Scientific, Technical, Engineering, Mathematics (STEM) field, as well as Cybersecurity and related positions. Hiring Our Heroes remains wholly committed to key partnerships with the Department of Defense and its many services, the Department of Labor, and the Department of Veterans Affairs, as well as the Small Business Administration to connect military spouses with meaningful career opportunities,” O’Brien said.

Hiring Our Heroes provides a variety of programs and events for military spouses. Whether you are preparing to make your next career move or reentering the workforce, HOH can help you every step of the way. Join the conversation by following #HOHMilspouse across Twitter, Facebook, Instagram, and LinkedIn. June 18, 2019
Where Are You Going to Be When Opportunity Knocks?

You never know when a life-changing opportunity will present itself. Being prepared for the off-chance occasion that 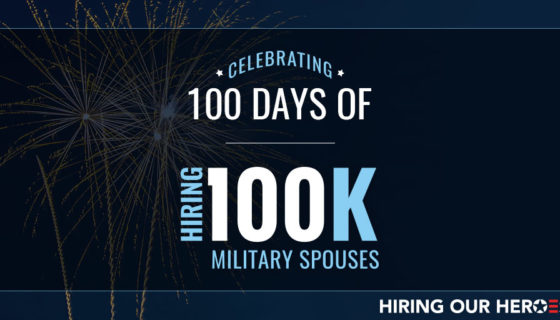 In June 2018, sixteen companies, from across the country and in a variety of industries, partnered with May 29, 2020
American Businesses Must Prioritize Mental Health and Wellbeing in the Workplace

With one in five adults experiencing mental illness, now is the time for employers to prioritize mental health and wellbeing in the workplace.