Oakman decided to serve after her college roommate enlisted. Two of Oakman’s brothers then followed in her footsteps and joined the U.S. Army. Currently, both brothers are serving on active duty.

“Throughout my military career, some of my full-time positions included working with Tricare and Deployment Health Programs,” retired Staff Sergeant Oakman told Hiring Our Heroes. She currently works a team leader at BlueCross BlueShield of South Carolina.

We Owe You a Tremendous Debt of Gratitude

Hiring Our Heroes and Toyota North America recently presented Oakman with a 2020 Toyota RAV4 as the winner of Hiring Our Heroes’ “Committed to America’s Heroes” sweepstakes. Besides representatives from Toyota and Hiring Our Heroes, Oakman’s former commanding officer and father attended the ceremony at Lugoff Toyota in Camden, South Carolina.

“This event is one way we thank our veterans and their families for their tremendous sacrifices and it’s a little bit more than saying ‘thank you for your service,’” Eversole said during the ceremony. “In this case, it’s about giving a brand-new vehicle to Staff Sergeant Kashona Oakman as a small token of our appreciation for all that she and her family has done for our country.”

In a surprise announcement during the presentation, Lugoff Toyota also covered the vehicle taxes and fees and donated three years of free car washes to the vehicle winner. “We’re excited to partner with Hiring Our Heroes to honor a local hero,” said Samer Abraham, new car sales manager of Lugoff Toyota.

Since 2011, Toyota North America has partnered with the U.S. Chamber of Commerce Foundation’s Hiring Our Heroes. A decade ago, the unemployment rate for veterans who served on active duty in the Armed Forces any time after September 2001 was 12.1%. The jobless rate for all veterans was 8.3%.

“Hiring Our Heroes could not have connected more than 700,000 transitioning service members, veterans, and military spouses with fulfilling civilian career opportunities in the last decade without partners like Toyota,” Eversole said. “We couldn’t be more thankful for them.”

The National Guard is an Integral Part of our Military Community

“I’m really proud of the fact that we’re giving this new RAV4 to a staff sergeant because she represents a population of our military service community that is often overlooked,” he said. “Our National Guard and Reserve community is an integral part of our military community. They serve side by side with our active duty service members.”

Eversole discussed the sacrifices that National Guard members and reservists make for our country.

“Our National Guard members not only have to balance a military career, but they also have to balance families, a civilian job, and many are going to school,” Eversole said. “To be able to recognize Staff Sergeant Oakman on being that silent warrior as she balanced a very demanding military career with a civilian career and a family, we all owe you a tremendous debt of gratitude.”

Oakman was honored to receive the Toyota RAV4.

“I would like to thank this great organization, Hiring Our Heroes, for everything that they do for veterans,” she said.

The sweepstakes is open to all active duty service members, veterans, and military spouses at HiringOurHeroes.org. Stay connected with Hiring Our Heroes through Facebook and Twitter to find out more about this year’s sweepstakes. 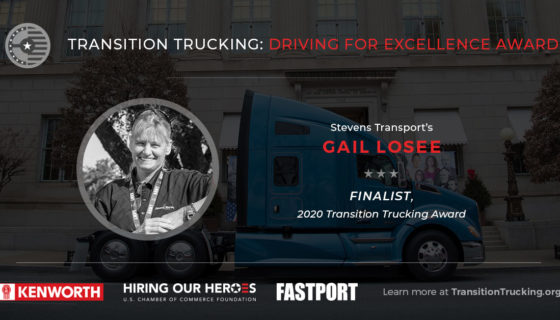 Now more than ever, Gail Losee is proud to be a professional truck driver. “These unprecedented times October 23, 2020
‘I Put All My Eggs in the Salesforce Ecosystem Basket’: Follow a Salesforce Fellow Through His 12-Week Experience

In many ways, Travis Malott is your typical military spouse. This Park City, Utah native has a